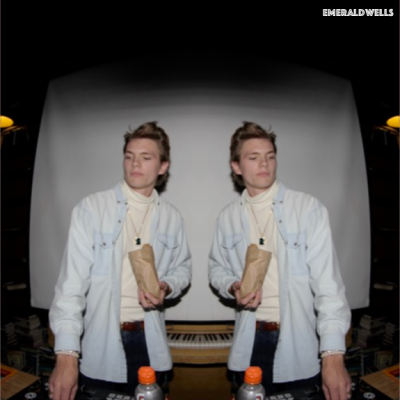 This user account status is Approved
The player for EMERALD WELLS has moved.
Launch the player
General info
EMERALD WELLS
Hailing from the beautiful mountainside city of Denver, Colorado is Tyler Zeller. Involved in music from a very young age via the passion of his father who was also an avid musician, Tyler got his start on the guitar. After playing around on his father’s guitars for years he translated his musical knowledge into a set of keys he had laying around his house and got cracking with Logic Pro and Reason a the age of 14. Shortly thereafter setting up a full bandstand in his basement and ever since spending his free time trying to one-up his prior work. Zeller Unleashed his EMERALD WELLS project late 2014 with his breakout album, Olympia, before linking up with otr.'s mediumrare outfit. Taking his biggest inspiration from acts such as Toro Y Moi, Washed Out, Lemonade, KAYTRANADA, and Goldlink he looks to follow in the footsteps of these prolific figures. Etching his own signature into Denver's diverse collective sound amongst other Mile High born up-and-comers. Emerald, now living down the road from his hometown in Boulder, CO has been able to release a trifecta of quality cohesive pieces of work; two EPs and a full length LP. Besides his EMERALD WELLS project he is apart of The Atlantic Club, a hip-hop group he formed with two good friends, AJ and Harry. In AC he produces for the lyrical talent of the two. Emerald Well$ says: “It started out as a little bit of a joke, but after we made our first song and people really liked it we were like, ‘okay we can actually make a name for ourselves as a group as well.’” Other than his self stated idols EMERALD WELLS has too been compared to the likes of Young Lean, Nite Jewel, and Mura Masa. He enjoys the fact that his signature sound influences are of such a wide array and looks forward to continuing to expand his capabilities. He's put forth an ode to his state, 'COLORADO', a well crafted ethereal safari-esque 4-track EP in 2016 before releasing a string of singles while we wait for his sophomore album.
Boulder, CO
United States
Links
emeraldwells.otrculture.com
https://twitter.com/emeraldwellsco
https://www.youtube.com/channel/UC0BLFmMJKOKoEZ-Dtv58zDA
Music info
ElectronicExperimentalHip HopR&B