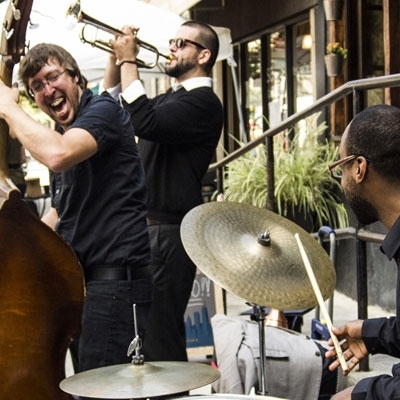 This user account status is Approved
The player for Fresh Cut Orchestra has moved.
Launch the player
General info
Fresh Cut Orchestra
The band’s debut release From the Vine, due Feb. 17 on Ropeadope Records, features nine original compositions and has a far-reaching, panoptic quality.. The album dips into various soundscapes and grooves, deftly migrating from ephemeral to slicing, which bespeaks the bandleaders’ range of experiences: Lawrence has performed with Erykah Badu, Boyz II Men and Orrin Evans; Fraticelli with Matisyahu, Taylor McFerrin and Mark Guiliana; and Marshall with Evans, Kurt Rosenwinkel and Dave Douglas. The Fresh Cut Orchestra started with a commission from Lenny Seidman of the fabled Painted Bride Art Center. He brought the three bandleaders together, and gave them funding to produce an original work for large ensemble. Their first show in October 2012 was sold out. Then came a Pew Center for Arts & Heritage grant that brought the band members into the studio, where they recorded the music that’s on From the Vine, plus enough for another full-length. And in 2013, the city’s Kimmel Center for the Performing Arts awarded the band a residency. There the three leaders wrote and performed a formidable array of new works—some involving a vocalist, Joanna Pascale, plus video art projections.
United States
Links
http://freshcutorchestra.tumblr.com/
https://twitter.com/freshcutorch
https://www.facebook.com/thefreshcutorchestra/
Music info
ElectronicHip HopJazz