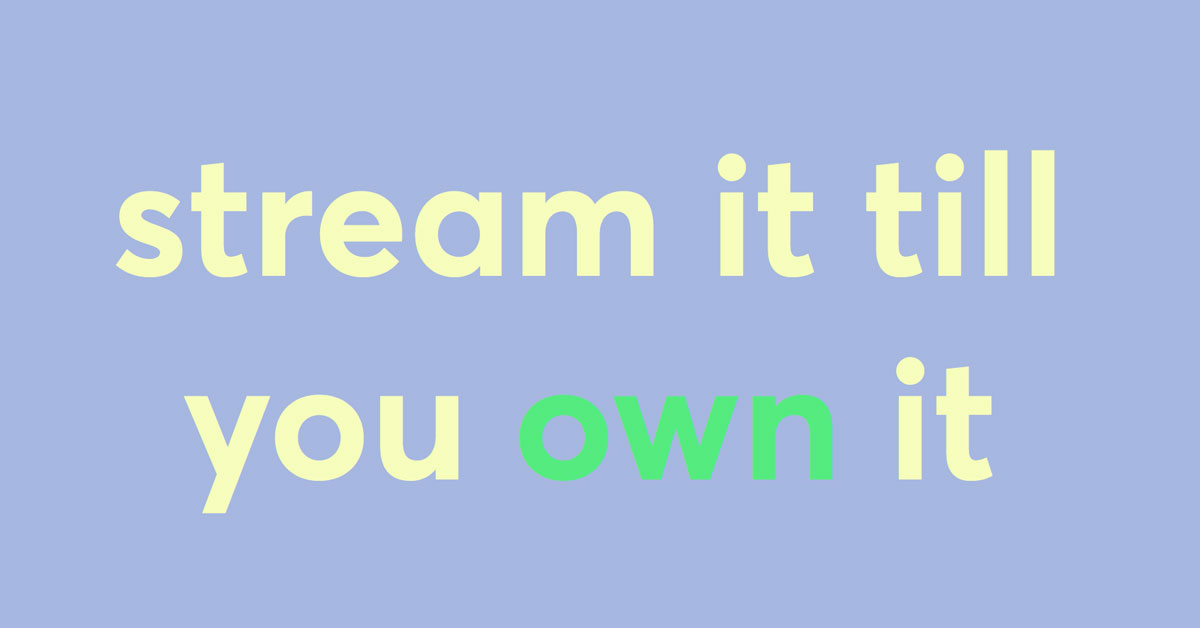 Editors note: this legacy post needs to be updated. Discuss in the forums.

While it seems that streaming is winning out as the preferred method of music consumption these days, all that glitters is not gold.

There is the well-known controversy about royalty payments but usually missing from the conversation about streaming is that it isn’t fair to artists because it’s simply not a sustainable business model.

We’re changing that through our unique #stream2own system, a method of slowly increasing price as a fan comes to love a song, starting really cheap until finally reaching the price of a normal download.

This totally new system for streaming/ownership is based on a top-up, pay-as-you-go model instead of the usual “all you can eat” monthly subscription.

We’ll explain later why a top-up model is better for artists and often costs the same for fans as subscription models. For now, let’s look at how the process works… 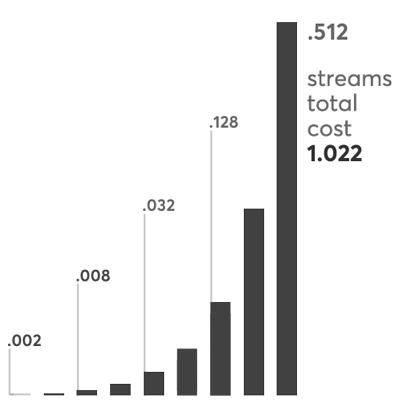 We start at .002 credits. The first stream of a new song is super cheap.

The second time a listener hears the same song, the price doubles to .004 credits. On the third listen, fans pay .008.

Notice a pattern? Indeed – the price keeps doubling every time the same song is played until eventually reaching 1.022 on the 9th play. Then the song is paid for, free forever and can even be moved out of our player. 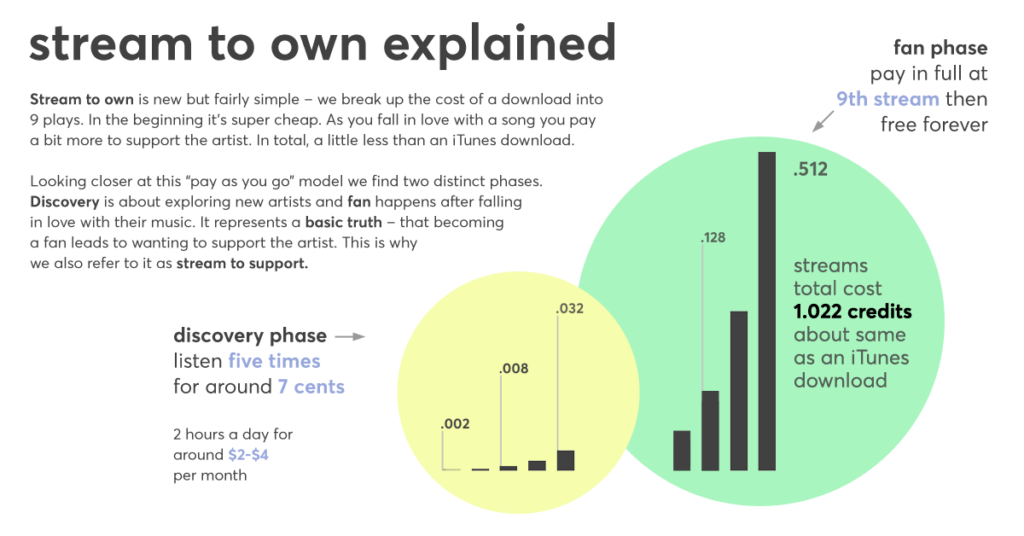 By example, Spotify states that their highest potential per-stream rate is $.0084. If we divide the cost of an iTunes download (after Apple takes their cut) by that stream rate, we get 107.

That’s how many times you’d have to listen to the same song on Spotify for the artist to get paid the same amount as a download.

With us, it’s just nine plays.

I’m usually bad at math, so let’s do that again to be safe…

If we adjust to the lowest quoted Spotify rate*:

*Many stories say actual amounts are even lower, but let’s not get nit-picky. (We’re also not accounting for distributor costs which usually takes out another 10%.)

So ask yourself… how many songs have you listened to 150 times?

Personally I think Kind of Blue is the only album that I’ve listened to a minimum of five times a year for the last 30 years.

We think that’s not sustainable and there’s an alternative:

But the stream-to-own model isn’t just about fairness and sustainability for artists. It’s also about effortlessly converting casual listeners into dedicated fans with almost zero effort.

That’s why we could just as easily call it… 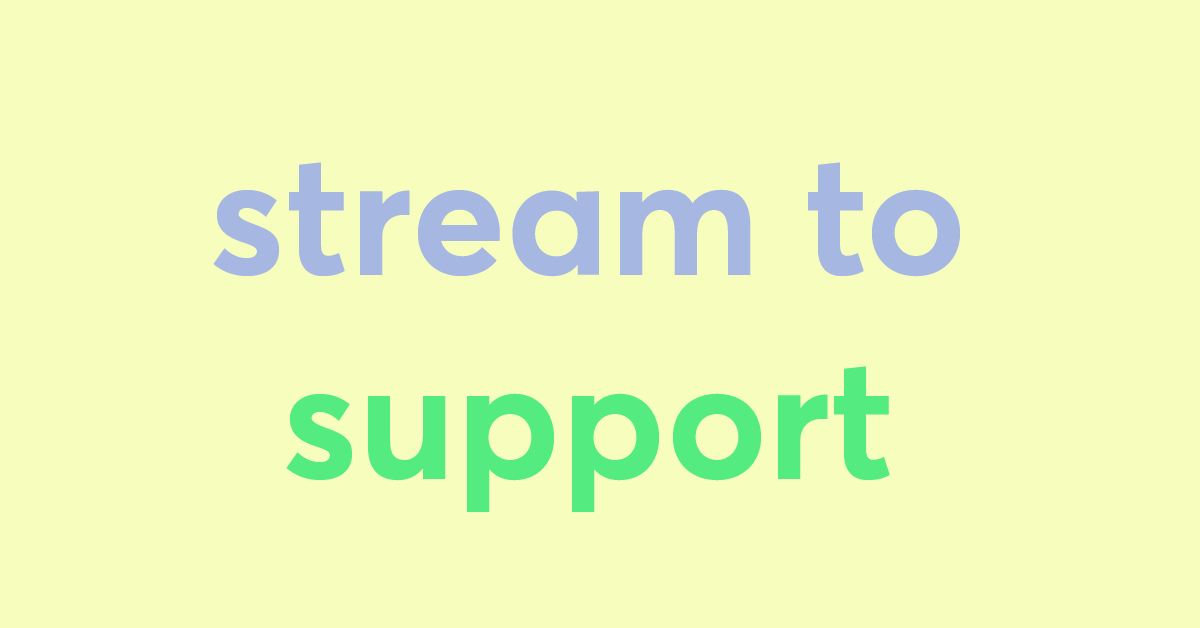 The deep psychology behind stream-to-own

This new music model is much more than clever accounting. It’s about something much more fundamental – the way in which fans have always come to love music… gradually, over time.

Having grown up as music fan pre-Napster, I remember the profound experience of music scarcity. Because we had such limited access, we were thrilled at the moments when randomly hearing a great new song the second, third or fourth time.

Those are the moments that a spark is created.

Those are the moments when an emotional bond is created with an artist.

And when those bonds are formed, what usually follows is some form of economic exchange. Because there’s a realization that in order to get MORE from those artists, we’re going to need to support them in some way. With Resonate, we make that process incredibly seamless. There’s no transition out of one app or platform to another just to buy a song or album… you just keep listening and eventually you’ll pay the full price as you become a true fan.

So by now it’s clear we’re operating on a top-up versus subscription model. But a question always arises… won’t that be more expensive?

The answer won’t be no in all cases, but it will be for most.

Spotify says that the average subscription user is listening 110 minutes per day. Let’s round that up to 120 just for fun. 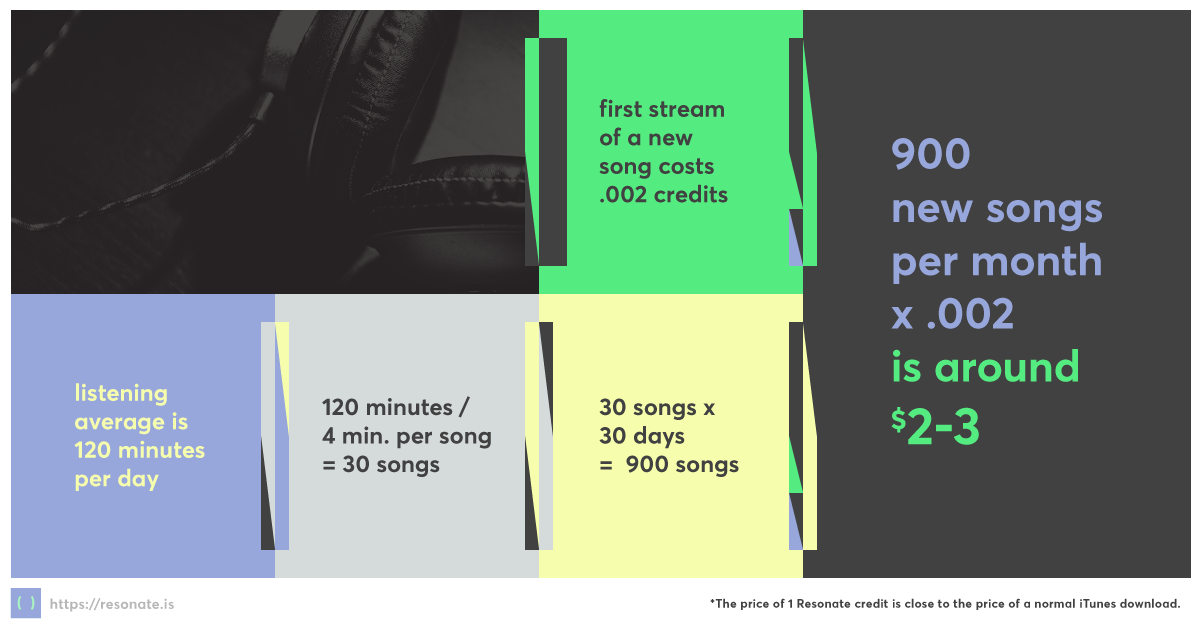 Let’s step it up a notch

Now let’s say you listen to more music with us and that a lot of those plays are second, third, fourth, etc… where you start paying more with repeat listens. The numbers:

You’ll notice that the repeat listens start to dwindle, which is realistic. While there’s a lot of great music out there, we’re not going to love everything. That’s why the number of repeats drops off over time.

So, what’s the grand total from all these plays?

Yes, it’s a little bit more than a $10 monthly subscription fee, but a listener in this scenario has also outright purchased half an album and is very close to buying two more. Albums they own, where the vast majority of the funds go directly into the hands of the artists. They’ve also listened to a lot more music than the average Spotify user.

To be fair, these numbers are just a best guess and we won’t know how things will actually break down until we’ve tested the system with real listeners. But it’s clear that a top-up model works, where listeners can enjoy access to a lot of great new music and easily transition to supporting the artists they fall in love with.

What if an artist wants to embed a player on their site, streamed and tracked in their Resonate dashboard, but free for their fans to experience something new? No problem.

What if an artist wants to give away the fifth stream if someone shares the song with one of their friends? We’ll be happy to build in that feature too.

Even though the stream-to-own model is designed to make sure musicians get paid for every play we also know that rules are meant to be broken, so if there’s a way to help musicians with self-promotion and discovery, we’ll do our best to adapt.

Reaching an even larger market

Often when people hear about Resonate their first response is “wow, that’s gonna be hard going up against Spotify!”

But the reality is, Spotify isn’t our competition.

You see, there’s an obscure reason why offering a pay-as-you-go model means we don’t really have many competitors. According to research from Nielsen, the average music consumer spends $153 a year and half that goes to live shows.

That means most consumers only have $76.50 left for spending directly on music (downloads, CDs, etc) but Spotify and Apple Music charge $120 per year.

Therefore, it’s easy to conclude that there are a LOT of music consumers who are not going to commit to a subscription service that eats up most of their music budget every year. But they certainly might be interested in an ad-free streaming service that only costs $30-$60 a year.

Making it fair across the globe

Since we’ve got artists and fans across the world, we saw an issue that would emerge from the beginning… it wouldn’t be fair for folks in the UK to have to pay more than the US just because of differences in currency valuation. So what we’re going to do is even out the price for Resonate credits across the planet so everyone pays a fair price.

To sum up, we think artists will make more money with Resonate, not just because it converts casual listeners into dedicated fans, but because with us every single stream will be counted and paid for at the same rate, something no other service does.

Help us build it simply by sharing this and other articles on our blog.

Together we can create a new music cooperative for the world.