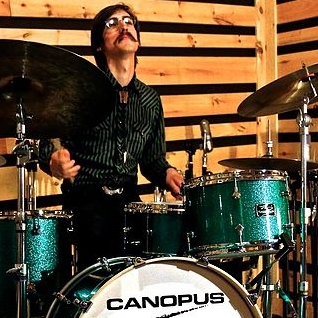 This user account status is Approved
The player for Arthur Vint has moved.
Launch the player
General info
Arthur Vint
Originally from Tucson, Arizona, Arthur Vint began studying music seriously at the age of twelve and by the time he was fifteen was already performing professionally. He has performed everywhere from dive bars to Carnegie Hall traveling the world with an array of different jazz, rock, country, and orchestral groups.​ Arthur focused on classical percussion studies throughout high school and served as principal percussionist of the Tucson Philharmonia Youth Orchestra from 2004-2007. During this time he was also a member of the Tucson Jazz Institute and gained invaluable experience playing in big bands and small groups with his peers. ﻿ Since moving to New York City in 2008, Arthur has appeared at many well-respected venues including The Blue Note, Dizzy's Club, The Cornelia Street Cafe, Smoke, Joe's Pub, Le Poison Rouge, Gramercy Theater, The Stone, The Museum of Modern Art, Symphony Space and The Allen Room at Lincoln Center. ​He maintains a busy performing and recording schedule with a plethora of different groups including The Candy Shop Boys, North of Amarillo, The Brain Cloud, Melaena Cadiz, Austin McCutchen, Scott Tixier, as well as gender-bending comedian Murray Hill and many more. He can also be found fronting his own groups, Arthur Vint & Associates, The Bedford Avenue Society Band and The Hot Tamale Baby Daddies. Arthur has appeared on over 25 albums in his career as a sideman, but will be stepping out on his own with his debut release as a leader coming out January 29th, 2016 on Ropeadope Records. Arthur Vint & Associates’ debut album “Through The Badlands” evokes visions of the western American landscape and draws on the images and sounds of Vint’s childhood growing up in Tucson.
United States
Links
http://www.arthurvint.net/
https://twitter.com/arthurvint
https://instagram.com/arthurvint/
https://www.facebook.com/arthurvintandassociates
https://www.youtube.com/channel/UC4LvJh6_qUZ1EvQ3cx8eXyg
Music info
CountryJazzRock